December is usually a slow month for a Canadian plate collector—old cars are put away, so there are no shows, no outdoor flea markets, few estate auctions… generally there’s not much going on. But lately, I’ve been reminiscing about December of ’95. I had been a member of ALPCA for only a few months. I had never been to a swap meet, let alone a convention, and I had only just begun to meet other collectors face-to-face. I owned maybe thirty plates in all, with most of them being items I had scavenged from the Searchmont dump through the 1980s. I was a full-time university student, making minimum wage at a part-time job. I enjoyed my tiny license plate collection, and I wanted to collect more, but there was no way I could simply buy what I wanted… I didn’t even have enough money to afford cold cuts in my sandwiches. It’s a good thing I was into truck plates at the time, since they were cheap.

Through the fall of ’95, I had received a few letters from some members of ALPCA who had seen my name in the membership update section. E-mail existed by 1995, although it hadn’t quite caught on yet, so people I had never met actually put pen to paper to say hello and welcome me to the hobby. One of the letters came from Ernie Wilson, who was a long-time member of ALPCA from Sault Ste. Marie—the same small city where I grew up. As it turned out, he had once served as the club president in the late 1960s. It was ironic that such a prominent collector would be living in the same end of town as had I, but even moreso that I had once attended school three blocks away from his home. I had been collecting for over ten years, thinking that surely I must have been the only person in the world who was interested in, let alone willing to collect, license plates. Suddenly, I was not alone.

My address, as published in the ALPCA Newsletter, was in London, so it caught Ernie by surprise when I replied to say that I was actually an east-end Saultite, just like him. Our letters were cordial, but not especially long. Ernie wrote his letters by hand and he would tell me about how he was still trying to find a few Canadian plates with ’95 stickers. When I told him I was trying to collect Ontario truck plates, he said he had many to swap. I told him that I would give him a call over Christmas, which was the next time I’d be back in town.

My parents found it odd that their 21-year-old kid had made plans to spend a few hours at the home of a senior citizen outside the family. They knew I had joined ALPCA and maybe, just maybe, this license plate hobby of mine was something more popular than they had believed. I drove off to Ernie’s one cold afternoon, and I didn’t know what I might find.

When I got there, Ernie greeted me at the door enthusiastically. I was stunned at what I saw—the back door entered into a small landing. To my right, the basement stairs disappeared into darkness, but the walls were completely covered in license plates. It was like metal wallpaper. The plates were arranged in a tile pattern from the steps to the ceiling. There were three steps ahead of me that led into the kitchen, and as I peered around Ernie’s tall frame, I could see the plates on the kitchen walls, above door frames, on doors themselves, and in small stacks along the baseboards. I was too green to be anything but amazed. The counter was cluttered with dishes, and the floor needed a sweep. As I climbed the steps into the kitchen, I could see that the table was also covered in small stacks of plates. Ernie lived alone, and there was nothing and no one to stop his accumulation of plates from taking over the house.

Ernie offered me a beverage and we sat at the table and I let him talk. He was full of enthusiasm for his hobby and had so much to say that I basically just absorbed what I could without interrupting. He’d point to a plate on the wall and tell me about where he got it, or who gave it to him. Then without missing a beat, he’d see something on the table that was different, and tell me about it. He told me about other collectors he’d dealt with and what he had traded with them. He kept records of which plates he still needed by way of hand-drawn tables on pieces of reused cardboard. He had all kinds of snapshots—many of them were reprinted multiple times, presumably to enclose in his correspondence. I couldn’t do much but listen, since I my collection consisted of scavenged plates, the best of which were no match for anything Ernie was showing me. I had no comparable anecdotes to offer Ernie in return, so I asked him questions and sympathized when he made the odd complaint about the government.

He showed me the living room, where he had laid his current-year plates on the floor to keep track of which ones he still needed. The majority of the deep-pile carpet was covered with tin. He had additional plates on the wall, and there were boxes of unsorted plates along the baseboards leading into the hallway toward the bedrooms. It was cluttered, and it was untidy, but I had never seen this many plates in one spot before— it was hard not to lose myself in the sensory overload. I had a camera with me, but these were the days before digital photography or the proliferation of video, so I was limited to about four frames at the end of my film roll. Before I could take my camera out, Ernie invited me down into the basement where, he revealed, the majority of his collection resided.

The only items in the basement that were not license plates were the washer, the dryer, and a black rotary telephone. Everything else was plates—tacked on the walls, hanging from the rafters, sitting on the floor, stacked in boxes, pigeon-holed in bookcases, strewn over the sump pump, filed under the stairs. I’d never seen so many in one place, nor would I again for many, many years. I had only been in the club for a few months, and hadn’t yet made the progression into a serious collector from the eccentric scavenger that I was used to being. When I look at the pictures and think back on what I saw, there was so much going on in my mind that I couldn’t process it all. I took pictures of the basement that showed his old motorcycle plates (I’d never seen any older than 1980), his four-digit passenger run from the 1950s to the 1970s (I’d never seen five-digit Ontario plates from that era, let alone four), and a couple of boards from his Ontario passenger run (I had no idea what the colours were for 1920s and 1930s plates-- The fact I was seeing a 1930 Ontario plate in its original white, and not rusty brown, was mind-blowing at the time). If I had a digital camera, I’d have snapped pictures all afternoon and evening. He had older Ontario stuff I’d never seen in person before, like diplomats, dealers and repeating numbers. As it happened, I only took a few pictures before my camera rewound the film.

Ernie knew that I was looking for some truck plates, and he had apparently cleaned out the local plate office each year of their surplus unissued stock. He had them all in a few unorganized boxes, through which I delighted pawing. Many of them were in mint condition, still with plastic bags or wax paper. I had never seen mint plates before, and didn’t really think that mint condition was possible. I filled a flat cardboard box with dozens of them, plus a few odds and sods that were interesting. Ernie knew that I was a poor young guy who was just getting started in collecting, so he priced the plates very low, with many of them being a buck each, and then he took an extra 10% off the price. I wound up with what became the genesis of my collection for around fifty bucks. Without thinking about it, I had spent a good five hours at Ernie’s place, and had missed my dinner at home. It was well worth the hunger. 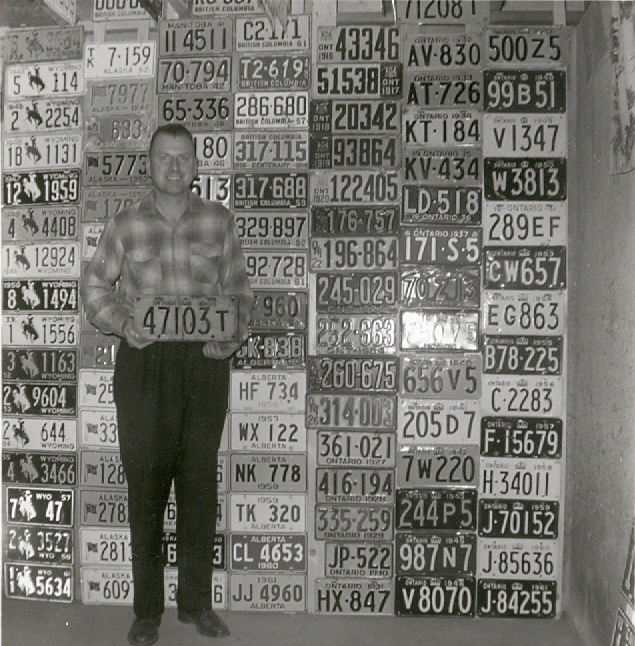 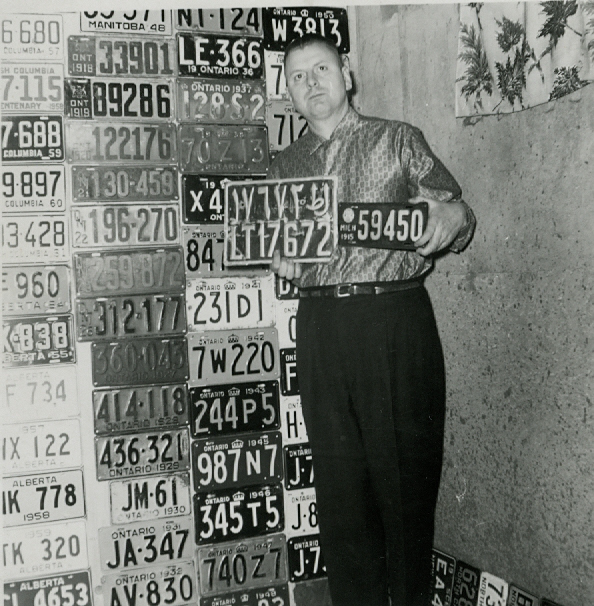 Many collectors have a kind of epiphany in their early years. Mine happened on that cold afternoon in December. I went back to visit Ernie several times in the ensuing years—sometimes to chat, sometimes to buy, and later, to swap. When I finally amassed some decent plates in my own collection, I had a ’44 Quebec fibre plate that caught his interest, so that became the first plate that I actually traded to Ernie—it was sort of a relief to be able to send something his way. I knew that I had benefitted from his previous generosity and it was nice to give back.

Each time I re-visited Ernie’s house, I would look at the kitchen walls, see the current-years in the living room, and of course, poke around the basement. Sometimes he’d find a box of plates that he’d forgotten about, such as in the spare bedroom closet, and we’d flip through them. I never thought to bring my camera—film was still expensive—and thus, I have no pictures of those later visits. It’s okay, though—the few pictures I do have are from the day that we met, and Ernie supplied me with a few snaps, too. It’s interesting to look at the period snaps of Ernie and see some of the same plates visible, still shiny and new, in the photos I managed to take decades later. When I look at them, everything from that first afternoon comes flooding back— especially the wonder and amazement that I’ve never quite felt since.