My kids are front and centre when it comes to most aspects of my life. They both take swimming lessons, one has soccer in the summer, and we’ve got two kid-centric vacations planned, like we do most summers nowadays. I’ve been lucky enough to steal away here and there to indulge my inner geek, but my 8-year-old daughter is mature enough to tag along. I’m planning on making a hobby-related journey by myself for several days this summer – which hasn’t happened since we only had one child – so to make up for that time away, I invited her along for the ride to the spring Barrie Automotive Flea Market this year. She’s not exactly an outdoorsy girl, so it was going to be an interesting experiment.

Packing the car was a little trickier than usual—bringing changes of clothes for two, an extra sleeping bag, the portable DVD player for movies during the car trip, a teddy bear, and a few other things. We finally rolled out of town by 5:30 pm on Friday. Traffic leaving Ottawa wasn’t awful this time— but then again, perhaps it’s because my perspective was altered two weeks ago by taking Lake Shore Boulevard to a Toronto Blue Jays game—we finally got there in time for the third inning. But I digress.

We passed through Renfrew about an hour after leaving. In June, the evening sun is still high at 6:30 pm, and I’m more inclined to take my time during the drive, since I still have over two hours of daylight to enjoy. I was glad that I chose to bring my girl along for the June Barrie show, as opposed to the fall one, since the sun would stay up later into the evening, and there would be more to see along the way. I pointed out the fairgrounds and some of the nicer old brick houses while we drive through Renfrew, and she spent time looking at some pretty green meadows that were lit yellow by the sun. I would have liked to hop out of the car to show her my favourite meadow with the stone walls at Hardwood Lake, but a cloud of blackflies and mosquitos appeared around the car when I pulled over, so we had to settle for a look from behind the windshields.

We did get out of the car at one point along Highway 28. I had swerved to avoid hitting a turtle, allowing it to pass safely underneath the car. But it was in a precarious spot, and I myself had only about a second to react after I saw it. The turtle was lucky to be alive. We pulled the car over and got out to pick the turtle up so we could lay it down in the grass on the side of the road to which it was plodding. My daughter watches Wild Kratts, and has developed an appreciation for wild animals, so she wholeheartedly agreed that we should take the risk of being bitten by bugs. With our good deed completed, we dashed back into the car and drove off with the windows down to evacuate the bloodthirsty winged pests that had invaded the car during the course of our benevolent endeavours.

We had planned to stop for some fish and chips at the wagon in Denbigh that I had discovered last summer, but sadly, the wagon was gone, and all that remained in the lot were some overturned picnic tables. We were disappointed.

“Don’t worry, dear,” I replied. “I know of a nice little Scottish restaurant in the next town that we can try. You’ll love it.” I was borrowing a line my father had used over 40 years ago on his then-recently-wed bride. My mother had come from England and she envisioned a quaint place with tartan tablecloths and maybe some UK-based fare on the menu. She was nonplussed when the only Scottish name on any restaurant in the next town was “McDonald’s”.

After a brief dinner, we stopped at the Kawartha Dairy for an ice cream. I showed her the menu, and in her typical style, she studied it for a long time, considering her options, before selecting Birthday Cake flavour. As a consequence of enjoying the burger and the ice cream, she conked out in the car for pretty much the rest of the drive to our campsite. I had the foresight to being mosquito-net hats for us both, which kept us from being eaten alive while I pitched the tent in the darkness. Our new air mattress worked extremely well, and we both slept soundly, albeit for only six hours.

The following morning, I was able to awaken my heavy-sleeper of a daughter and we arrived at the Barrie parking fields by seven o’clock. I knew I’d be paying to park there again, but the first sign I saw was one for premium parking at $20 per vehicle. I grumbled angrily, assuming that the entire field had been designated as “premium” before seeing the $5 parking sign as I turned into the usual field.

Eric Vettoretti had made the trip separately to Barrie, and accompanied us onto the grounds. The first vendor we saw had two pairs of YOMable plates, which we bought. We were one for one on the day. “At this rate…” we joked.

But a couple of trips down the first rows showed us that this was not going to be the same Barrie Market that we had previously enjoyed. The amount of empty space was disturbing. The less-travelled areas down toward the bottom are typically not full and have a lot of empty spaces. However, we were still up toward the top of the field – the most heavily-walked region of the grounds – and some rows had more empty spaces than they did vendors.

“Apparently, the price has gone up again,” said Eric, who mentioned that one former vendor that we both knew personally had called it quits. “The cost to vend isn’t worth it anymore. He said, ‘He’s not getting any more money from me,’ and I don’t blame him.”

The weather was beautiful, without a cloud in the sky, but there were still numerous closed vendors in the first hour. The park owner would usually get on the PA and deliver his morning remarks by 7 o'clock, as a sort of wake-up call, but he didn’t do so until nearly 9, and even then, it was to read the riot act, and plead for more vendors:

“Too many vehicles running around! All you’ve got to do is run into somebody, so please remember that everybody here is care-free… Leave the motorbikes on your sites… If you know of any antique car collectors that are sixty years of age or under, give me their address. The old guys like me are dying out.”

My daughter had brought $20 of her own birthday money to spend at the market. I decided it would be a good way of helping her learn about budgeting and practical math. It worked well—she normally has a bad case of the “gimmes” at places like this, but she liked the freedom of being to buy whatever she wanted, with the understanding that once the money’s gone, that’s it. She carefully chose a doll that she really liked for $5, and then a keychain for $3. She also picked up some candy for $2 more, and spent nine dollars on the day. She decided that was her limit, and didn’t want to spend the rest. Good girl.

My girl found a shaded place to play with her doll while Eric and I went to “Pricey Sign Guy” nearby. He wasn’t vending last September, so the last time we saw him was a year before. We systematically went through his plates and came up with about eight sets. I was even more enamoured with his selection of King’s Highway shield signs. This year, he had some real oddballs, including a couple of blue QEW trailblazers, an old DHO Site Office sign (very rare), and some smaller shield signs from the 1930s. I thought long and hard about getting one, but I couldn’t make up my mind. I decided to chew on it for a while and come back later.

The back ends of the green and yellow fields were virtually deserted. I’ve never seen them so empty. I’d have to estimate that of all the available space in the back half of the park, including the brown field, half of it was unoccupied. Eric and I speculated that with the rising costs here, some vendors are jumping ship for the new AACA market in Lindsay four weeks earlier. Eric attended Lindsay last year and said it was basically full. The September Barrie market last fall was as full as usual, and might be considered “The” swap meet to attend, given its time of year, but vendor registration during the spring edition is definitely waning.

There wasn’t a lot else to find this time. I did pick up a better 2003 for my natural run, and a couple of minor YOM prospects, and some wire wheels for a dremel (to use when stripping hard-to-reach spots as I restore plates), but that was basically it. My daughter was becoming tired and needed to rest frequently, so that kept me from combing the fields quite as thoroughly as I might otherwise have done.

We went through the show lot, and there was a handful of YOM-plated vehicles for me to enjoy, including two that had been sold by yours truly. One was a 1960 Pontiac, and the other was a 1972 Buick Skylark, with one of the coolest numbers that I’ve ever had the fortune to offer for sale through Ontplates.com. Coincidentally, there was another ’72 Skylark there, also with YOM plates, and four-digit ones, too—very sharp. But I’d have to say that my favourite YOM-plated vehicle was a 1953 Chevy delivery truck, decked out in construction company livery. I enjoy light commercial vehicles (it’s one of my favourite recurring features in the Old Autos newspaper).

I found that both of the Ontplates posters that I had stapled to the pay phone boards last summer were still there, but badly sun-faded and frayed, so I pulled them off and replaced them with new ones, as well as a healthy amount of pull-offable business cards. I have no idea if I’ve even generated an inquiry using this method, let alone a sale, but it’s free advertising, so I’m not going to turn down the opportunity.

It was nearly two o’clock, and my girl had had her fill of the market—six hours of sleep were taking their toll. We got in the car and headed for home, and she fell asleep fairly quickly, and stayed that way for more than half the drive. It was the first time in a couple of years that I’d been able to drive my favourite Monck-Opeongo route to and from the Barrie-Orillia area entirely in daylight. It was a lot of walking for her, and the sun was hot, and she didn’t feel well as we were approaching home, so I’m not sure she’ll be in a hurry to go again. As for me… rain or shine, hot or cold, five bucks or twenty to park—I’ll be there. The good always outweighs the bad. 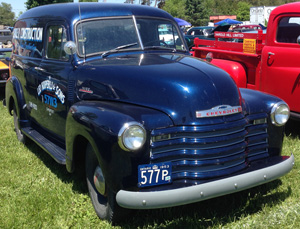 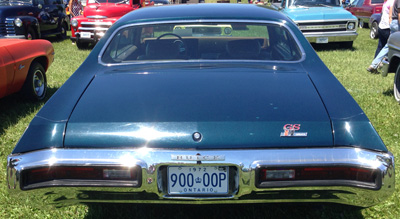 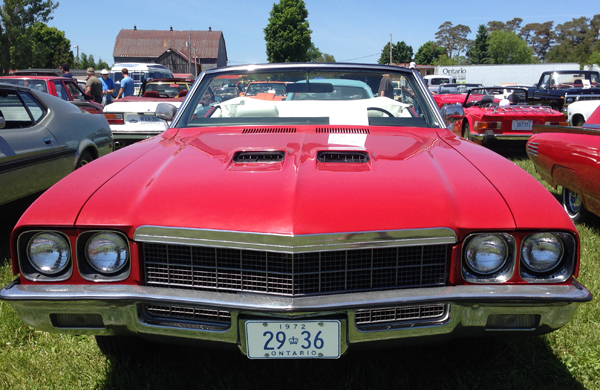