The first weekend in May is ordinarily when I make the drive to Stirling, to attend their big flea market at the town fairgrounds. Up until four years ago, it was known as the AACA Antique Automotive Flea Market, before the AACA dumped the town of Stirling over reduced parking space in favour of Lindsay. I must say that I never had a problem with parking in Stirling, and I find it hard to believe that moving was the only solution. But that’s just my own view.

Stirling, not a town to lick its wounds, began holding the Stirling Antique Flea Market on the same weekend in the same location the year after—and I found the place was chock full of pretty much the same stuff. Lindsay, on the other hand, I knew nothing about. My pal Eric had gone there for its inaugural year, and his impression was that it was smaller and might need time to pick up steam. I normally bring my young kids to the flea market on the first weekend in May, but I’d always have to choose one or the other. This year, I decided to give Lindsay a whirl.

Coming from Ottawa, I have to leave pretty early for the drive to Stirling if I want to sail into the fairgrounds without a traffic jam. I figured the same might be true for Lindsay, which is an hour’s drive further away. So we went to bed early, and I set my alarm for 3:40 am to put the portable DVD players in the car, books for the kids, GPS, dash cam, and various other things I like to have for a road trip. The kids had worn some clean, sleep-friendly clothes to bed the night before, so I could just scoop them up, carry them downstairs, and buckle them in the car. We grabbed some nutritious breakfast at a local McDrive-Thru, and we were off down Highway 7 in the darkness.

The kids were tired, but wide-eyed in fascination at the world of night that they don’t often see. The near-full moon was visible in a strange direction, the sky slowly became light because it was “morning time,” and there were bands of ground-level mist on the road: “Daddy, is that another cloud for us to drive through?” We moved steadily westward and arrived at the Lindsay fairgrounds at about 8:30.

The first thing I noted was that there was definitely ample space for parking, but I wasn’t sure that there was much more than Stirling, if you count the off-site fields that normally get used there. We walked through a pocket of outside vendors near the parking lot. Only auto parts were for sale—no tablecloths with china on them, which seemed to bode well for what I might find. My platey sense didn’t tingle much as we walked through this area, and when we were done, we walked across an empty section of land to go to the main market building for the indoor vendors.

The indoor vendors mostly sold pre-packaged items, or electrical signs, delicate collectibles, and things of that nature. There was a guy selling plates, and when I bought some, he graciously allowed my kids to pick one each of their own for free. My son chose a Wyoming plate with the cowboy riding the bronco, and my daughter picked a Mississippi Wildlife plate with a deer on it.

The challenge with my kids is that they fixate on the first things they see. This time, the first things they saw were pre-owned, dirty stuffed dolls. I won’t let them buy that with their budget money, because there are more sanitary things they can buy. Seriously, I don’t know why vendors bring that stuff to flea markets. You can’t clean them properly, you don’t know which cat has barfed on them or how many times they’ve been rained on at previous markets, or who’s been smoking cigarettes in the same room as them, or whether their previous home had a bed bug problem. My daughter still wanted a stuffed doll, and luckily she found one for five dollars that was new in packaging. I managed to interest my son in some Hot Wheels cars, so they were happy with their haul at the market.

As for my haul—I wasn’t thrilled. I know I can’t search as thoroughly with the kids in tow, but even so, I didn’t find a lot. I would say the number of vendors in Lindsay was – at best – about the same as Stirling, but it felt more likely that there were fewer vendors in Lindsay. Maybe it’s because they were so spread out into four different sections of the market, with walking detours necessary to see all of them. The advantage that Lindsay does have over Stirling is that the AACA requires vendors to be selling mostly automotive parts. There were no vendors selling only off-topic items like jam, crocheted sweaters or toys, so I didn’t bypass any vendors on that basis. But I also found that there was less of an emphasis on antiques and memorabilia. People were especially selling auto parts, with fewer people doing things like plates or signs. I only found five sets of plates that I liked enough to buy, whereas I would have found more in Stirling. On the other hand, if I was looking for parts for my ’71 Bug, I would have hit pay dirt in Lindsay, but not so much in Stirling.

Another comparison I made was with the venue itself. The Lindsay fairgrounds are harder to navigate because the vendors are laid out in four fairly disconnected areas, and the property itself is not flat—two of the vendor areas are uphill and two are downhill, which makes it tiring for small kids, and difficult for people with mobility issues who use walkers, canes or wheelchairs. The outdoor vendor fields had a hard dirt surface, with occasional sparse patches of trampled grass. In dry weather, like eastern Ontario had been having this spring, it was a dustbowl, with each footstep kicking up a small cloud of dust. A gust of wind would occasionally throw a cloud of sandy dust into squinting faces. In wet weather, this field would be a muddy swamp, with insufficient grass to make it more walkable. Stirling, on the other hand, is flat, and has lots of grass to keep the mud down in wet weather in most areas. Stirling has its muddy spots around the track during rainy weather, but has walkable lawns most everywhere else.

The most visually interesting outdoor vendor, to me, anyway, was “License Plate Tarp Guy” who had literally hundreds of plates laid out on a huge orange tarpaulin. I took a cursory look through them, but they appeared to be all singles— unless there were unmated pairs scattered throughout the pile awaiting reunion—but I didn’t have the time or child-free independence to give it my full effort. If I was there with no kids, I would have spent an hour there at least, combing the plates for pairs or weird number combinations, which I, as a plate geek, love to do.

Time was getting on, and I brought the kids into the show lot to see the classic cars. I managed to find and photograph three vehicles that bore examples of my YOM efforts. It was a warm, sunny day, with many open-windowed cars into which I could have dropped my business cards, but my kids were restless and I couldn’t ask them to bear with me any further, so we called it a day at 12:30 and headed back to the car. 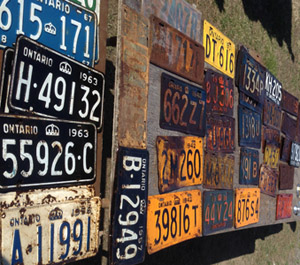 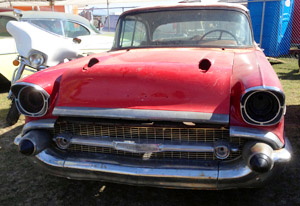 We were about 20 minutes out of Lindsay, as I was chatting with my kids about what part of the flea market they liked the best, and what cars they—

I immediately pulled the car onto the shoulder of Highway 7 and ran around to my son’s door, but it was too late. It took several seconds to release him from the five-point harness of his safety seat, and by then, the damage was wholly done. I pulled off his shirt and used most of a box of tissues to clean the mess while barking at my nine-year-old daughter to stop playing the drama card. It was a tough spot—I had no extra clothes for my son, the car was smelly, my son was crying, we were nearly out of tissues, and we were on rural Highway 7 with no oasis in sight.

I did what I could to restore order and a semblance of cleanliness, but my son would have to ride shirtless for a while. I finally found a pharmacy in Havelock where I bought some baby wipes (I thought my family was past that stage?). No clothes available, though, with no ideas from the cashier. I kept my eyes peeled along the highway for someplace likely to have kids’ T-shirts for sale. I eventually saw a “Trading Post” tourist trap just before Marmora and figured that was my play. I made an emergency T-shirt purchase for $13—it was the only shirt in the whole store that would fit him.

Side – by – side comparison of Stirling versus Lindsay: