I received a phone call from an antique auto enthusiast last week. We hadn’t spoken in a few years, but previous to that, we had connected at car shows in Barrie and Cumberland, and I had previously purchased some plates from him. His main interest is antique automotive literature, but he’s a collector at heart and tends to keep items that he finds while searching for his antique books and manuals.

A few years ago, at the Cumberland heritage museum, he brought his 1939 Rolls-Royce Wraith to display at a special event. I was volunteering as an interpreter at the museum’s wartime-era garage, and I was fortunate enough to be invited for a short ride on the gravel loop through the museum grounds. It remains both the oldest and most stately vehicle in which I have travelled (albeit just a few hundred metres). I still remember the finely varnished wood of the dashboard and the numerous controls built into the right-hand-drive steering wheel. The car was truly a sight to behold, and even more to experience from within.

That winter, he invited me to his garage downtown to look at some plates. It was a cold, snowy evening, with nickel-sized flakes rapidly covering the bare tree branches. We walked a couple of blocks from his home to the garage, located down a concrete ramp in the basement of an older Tudor-style duplex. He opened the door and turned on the lights. There sat the Wraith, comfortably in the warm garage, looking just as sleek and sturdy as it had in the summer. He also had a handsome 1940 McLaughlin-Buick, plus some shelves lined neatly with boxes, tools, and perhaps a file cabinet or two. The garage was quite tidy, with its concrete and brick walls painted a uniform gray, and iron pipes emerging from the ceiling, painted glossy black, threading this way and that. The building was built in the same era as the cars, so it was like stepping into the past. We went through his plates—lots of fun, I’ll tell you—and I acquired the lot of them that same evening. He said he had others elsewhere, in a collection of sorts. He said he’d get in touch with me if ever he decided to part with them.

We crossed paths again once or twice over the years, but it wasn’t until the late fall of this year that I received the phone call. He had been downsizing, and had sold off the building where the garage was located. He was in the final stages of moving out, and he was ready to sell his collection of plates. He gave me a brief description of them. We arranged a time a few evenings hence when I would view the plates.

I wasn’t sure how many there might be in total, so I brought some bins to carry them, and I also brought more money than I was sure I’d need. I left a little early to make the drive down to his garage, as it was in an older part of town with many one-way streets that might make navigation a little tricky. In the end, I arrived right on time and knocked on the door at the bottom of the ramp. He cheerfully greeted me and invited me inside.

The garage was much as I’d remembered it, although the cars were gone. The McLaughlin-Buick had been donated to the Canada Science and Technology Museum across town. The Rolls had been sold to a car collector in Australia. The closing date of the building sale was coming up in a few days. He told me that he had bought the place back in 1967, ostensibly because of the heated garage in the basement where he could keep his growing collection of classic cars. At one time, there were a half-dozen of them stored there. Now, the garage was bare, aside from a few boxes, shelving units, and of course, the Ontario licence plates, which were around a corner on a workbench.

He had some things to pack up, so he left me to flip through the plates and come up with a value. I borrowed a scratch pad and got started. The 1918 pair was lovely and would be a great fit in my collection. The 1919 pair was as nice a pair as I’d ever seen. There 1920 pair was quite clean, too. As I went up through the 1920s and 1930s, I encountered a few singles among the pairs. Most of the plates were of pretty good quality. Of course, my YOM sense was working overtime as I went through the plates, but they were a little snake-bitten: The pairs bore numbers that were unlikely to clear, whereas the promising numbers I did see were on unpaired plates where the mate was missing. Because of that, I would have to keep my offer conservative. 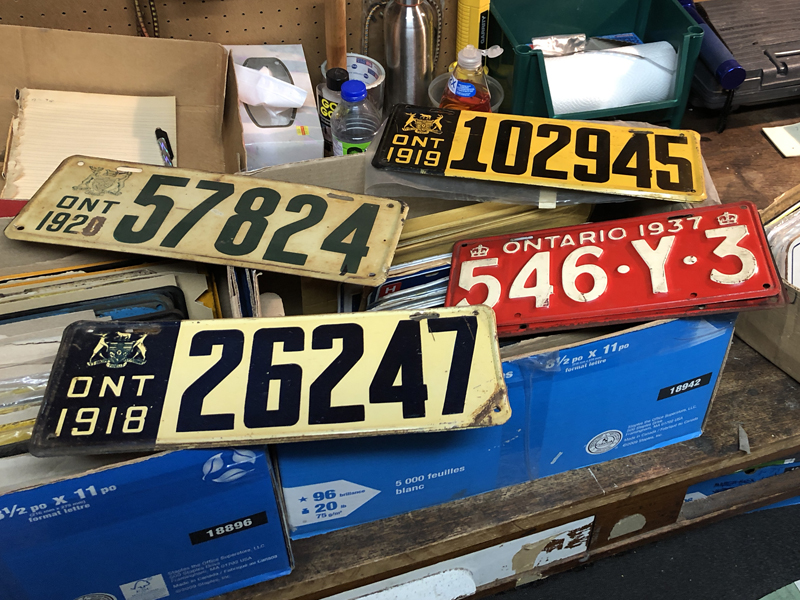 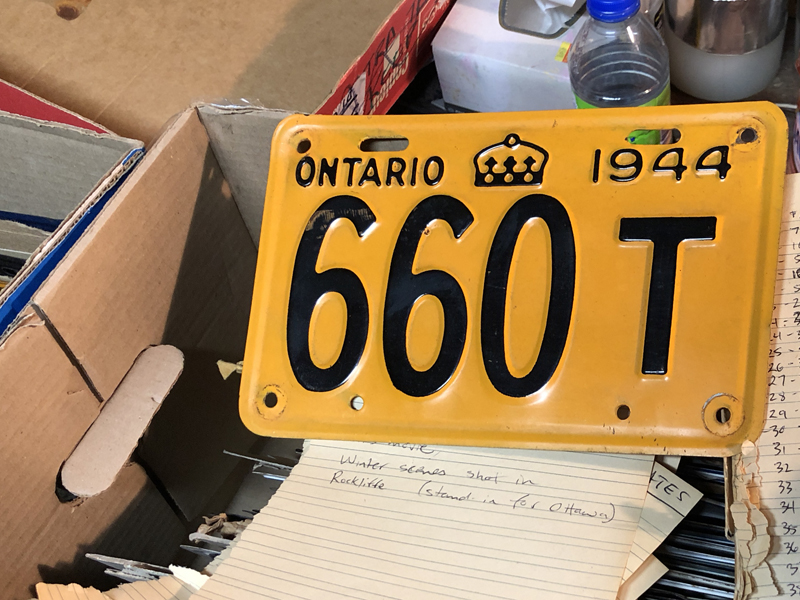 I kept going. There was a beautiful pair of 1937s which I knew would go straight into my collection. There was also a 1944 trailer plate, a short three-digit number. It was half-a-grade below the one that I already had, but I’m a sucker for low numbers and unusually short plates. This 1944 plate would definitely be a gem in my collection.

I encountered a few more singles in the 1950s, which would stymie my ability to make a higher offer, but I was satisfied that I’d be able to come up with a number that worked for us both. I made my offer, he made a counteroffer, and we shook on it. It was fair to both parties, so I brought the entire lot home. I would spend my spare time going through the plates more thoroughly in the coming days, especially those in the extra “odds and sods” box. 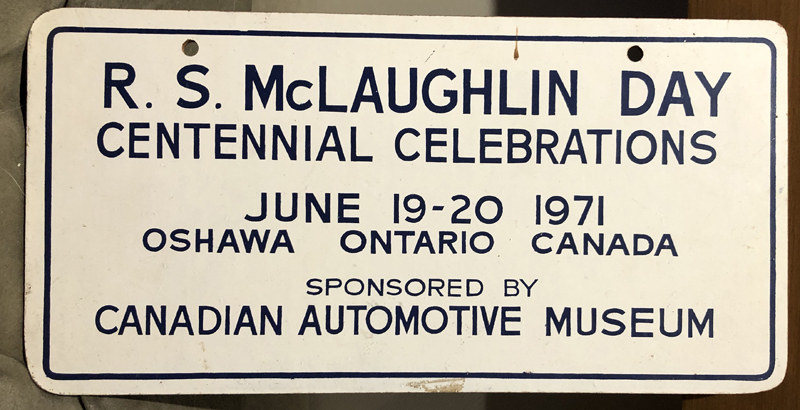 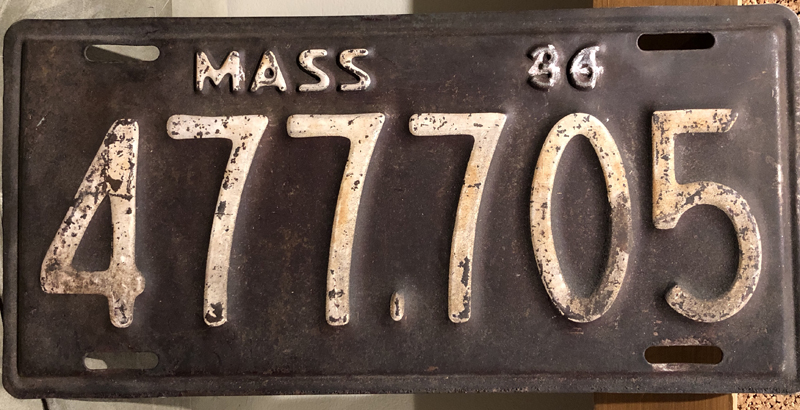 Among the “odds and sods” was a booster plate to commemorate the 100th birthday of R. Sam McLaughlin, the founder of the McLaughlin Motor Car Company in 1907, which later became known as McLaughlin-Buick, and subsequently, just Buick. Sam’s 100th birthday wasn’t until September, but a centennial gathering took place a few weeks early on June 19-20, 1971. As part of the celebration, there was a parade, in which participated a McLaughlin vehicle of each year. My collector friend was there with his vehicle to represent the year 1940. Sam McLaughlin no doubt enjoyed the celebration, but he passed away the following winter.

Screen capture from Mr. and Mrs. Bridge. The plate on the car is the plate I acquired.

Another interesting plate in the collection isn’t even from Ontario. It’s a 1936 Massachusetts plate, but with the “36” painted over with the number “44”. The plate was used as a prop during the production of the 1990 film Mr. and Mrs. Bridge, starring Paul Newman and Joanne Woodward (who received an Academy Award nomination for best actress in her role). So, why was this plate here? My friend told me that the winter scenes were filmed in Ottawa, which stood in for 1940s Kansas City. Various old plates were used on the vehicles without concern as to geographical accuracy, since they were too distant to be identified (that is, by anyone but a licence plate collector). My friend was hired as an extra to drive his 1940 McLaughlin-Buick up and down the street in the background during filming, and although the Massachusetts plate wasn’t used on his vehicle, he was given it after Ottawa production wrapped. I was able to find the movie online and watched it one evening. The story was essentially a character study of a husband and wife who are alienated from each other, from their children, and from a modernizing society. The Ottawa-filmed wintertime scenes arise near the end of the film, and I was astonished to see the exact same Massachusetts plate on the screen, with rust on the numbers in the exact same places. Imagine that, the proof being so clearly in the pudding! Joanne Woodward’s character is excitedly greeting her son, who comes to visit with a friend in a 1930s era auto. The car is briefly stuck in the snow, and Woodward appears to place her hand on the plate as they push the car backward.

So, the winter season is off to an interesting start! I’m continuing slowly to go through the collection. I’m upgrading a number of plates from my own runs, as I expected I would. I’ve decided to keep the McLaughlin and Massachusetts plates, but there will be some pretty neat traders that come out of my collection regardless!

Plates in the Killaloe sunrise