I used to be proud of the way I could keep my ear to the ground and sniff plates out of small-town Ontario. For a long time, I’ve subscribed to small newspapers and scanned the ads in each issue, looking for estate auctions that might contain some hidden gems for my collection. That’s how I found out about the now-legendary Warren Hastings auction in 2001. That’s also how I tracked down the Archibald Haines auction in 2005, wherein I acquired a mini-run of MPP plates, including some all-numeric three-digit issues (I drove six hours on an early-fall weekend and was the only plate collector in attendance).

But the Internet has changed the scene. More and more auction houses are becoming web-savvy. They’re noticing the excitement that they can generate by actually taking the time to post individual lots with pictures. Social media has changed the scene even further. Reps from auction houses join collector groups on Facebook and post the goods to be sold in the weeks ahead. And in the meantime, collectors salivate, count their disposable moolah, collude with their friends, or even beg pitifully to the auction staff that the items be pulled down and sold privately.

So it happened last month that an auction house representative joined the Ontario Licence Plates group on Facebook. All we really want from that group is to hear about Ontario plates from Ontario people. And boy, did we ever. It wasn’t long until a catalogue to the auction was posted, along with some pictures of the primo stuff, including the infamous matching pair of 1916 temporary plates, and their numbers-matching tin siblings, issued to the same owner later in the year once the factory supply could catch up. (Sometimes, in this column, I come across as a complainant, but that’s not the case here: The auction house is based in Ontario, and they did post about Ontario plates. Fair ball.) 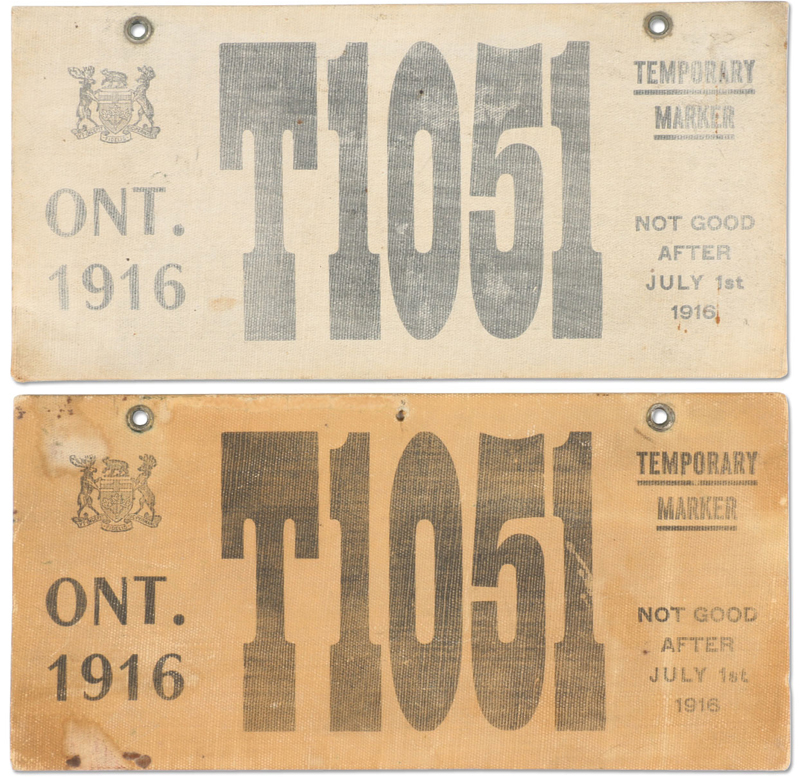 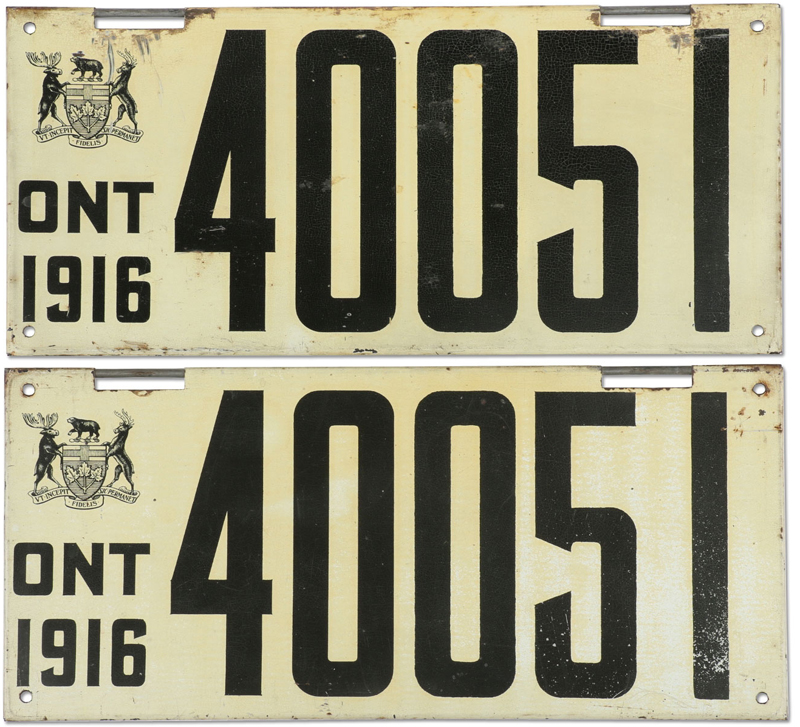 I had known about these temporary plates for a few weeks already, thanks to my periodical subscriptions. But with the post on Facebook, suddenly everyone was watching and the playing field was completely levelled off. Chatter began, ostensibly about the potential value these plates would bring to the estate.

Pairs are my best friend, and not just because I’m in the YOM business. Eric Vettoretti has very similar collecting tastes to my own, and we don’t live far from each other. We’ve found some incredible pairs of plates over the years and have fostered a fair system by which we split the pair and decide, equitably, who gets first choice. What pairs have we found together? 1939 doctor, mint 1927 passenger, near-mint 1930 passenger, motorcycle dealer, graphic veteran, green vehicle… the list goes on. So we decided to continue that tradition by quietly targeting the 1916 temporary plates, plus their matching tin compadres.

We knew that it would take a very large bid to win those temporary plates, of which maybe a half-dozen still survive (my estimate). We discussed it back and forth. We needed a number that would be manageable to us, but one that would hopefully sledgehammer the opportunists. There was an 18% online buyer’s premium to be paid, plus 13% HST compounded atop that amount. We came up with a number, but I suggested that we go higher, just for insurance.

We also came up with a healthy bid for the matching tin plates. They were valuable to us mostly by virtue of the fact that they matched up, numerically, with the canvas temporary plates. They were in excellent condition, but each of us already has an excellent 1916 in his passenger run, and we weren’t looking to upgrade. These tins were only of interest to us if we could win the temps.

And so, we lay quietly in wait until Saturday, February 10.

Auction day came, by which time the opening bid of $25 had predictably crept upward to $850. Online pre-bidding would close at 10 o’clock for all lots, and then the live bidding from the floor would commence. Online bidders could still participate in the live portion, but the plates were lot number 386 of the day, which meant it would be hours until they came up. I had a birthday party to host for my son that afternoon, and there was no guarantee that I could be ready at the right moment to place a live bid.

I waited until shortly before ten o’clock, texting with Eric all the while (he's on the left).

I pulled the trigger with our bid, and the active amount jumped a little to $1300.

The clock ran out, and the floor bidding promptly began with lot one… some kind of non-plate knickknack. I had a birthday party to host, so I put my computer to sleep and switched to “dad” mode, sneaking the occasional peek at the auction progress as time allowed.

At about three o’clock, my son’s party guests had left, and I sat in a chair at the local party hosting centre. Lights and noise abounded from the surrounding arcade games and bumper cars. I refreshed my web browser, and the active lot was 386b... the 1916 tin plates. The temp plates had just sold in the previous lot, but since I had a live window open, I couldn’t see the results of the previous lot, which had been overwritten a minute before. So I texted Eric, who, I was sure, was watching all the action on his own screen.

Thrown out of the water is right. We two had hoped to do that to the other bidders, but our high bid—the most aggressive stance we’ve ever taken in an auction situation—was merely half of the winning bid.

Imagine… $14,000. That’s tuition. Or a car for someone. That amount once totaled my annual earnings when I was a student. Fourteen thousand dollars. But after the buyer’s premium was levied, the amount blew up to $16,100. That meant the buyer’s premium was calculated at 15%, meaning the buyer was in attendance personally at the auction, and was not an online also-ran like us.

I sent a message to Dave Steckley. I knew he would be there— and he had earlier posted to Facebook some pictures of the lots of interest from the auction hall, including the temp plates. Dave has a single temp plate in his collection, but in lesser condition than either of the temps on the block on this day. It didn’t seem logical that he’d go so high just to upgrade a plate he already had. I was curious as to who the winning bidder might be.

At sixteen thousand dollars (or just over eighteen thousand after sales tax), I wondered if the winning bidder was a non-collector… meaning an outsider to the community of established plate geeks in Ontario. I’ve only ever seen an Ontario plate sell for five figures once, and that was during a heated eBay bidding war for the 1905 leather shield plate that eventually came out of old Dwight’s collection ($15,000 CAD, in case you’re wondering). Sure, these 1916 temp plates are rare, and in marvelous shape, with matching numbers to their tin successors, but they would seem to be lower in the plate-collecting hierarchy than a first-issue leather shield. Based on that, I reasoned that a well-to-do collector bought them without knowledge of that hierarchy, or to previously established valuation.

The overheard consensus among the auction hall chatter was that the buyer was indeed a known wealthy individual (and generous philanthropist) from southwestern Ontario. He is keenly interested in automotive history, but is not specifically a plate collector. Observations of bidding participation would seem to indicate that the individual’s agent was the high bidder on multiple lots, many of which were sold far above their established value. For example: 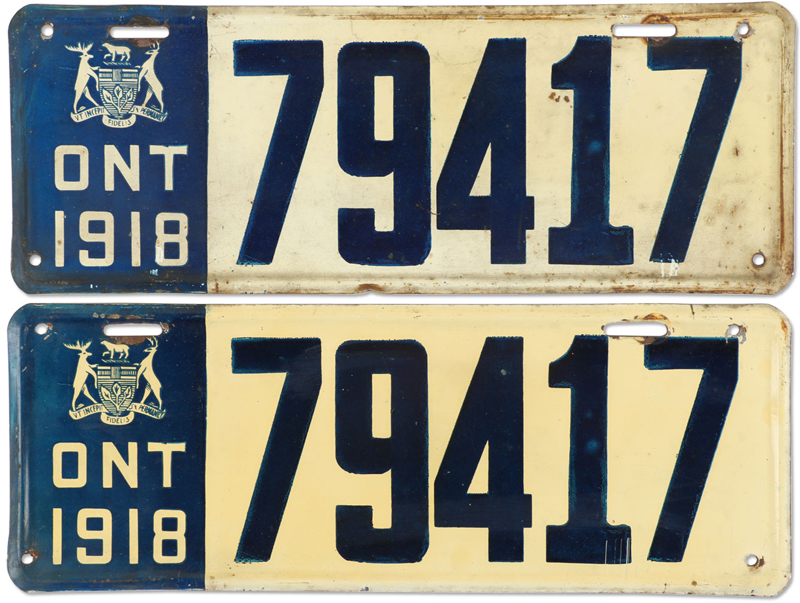 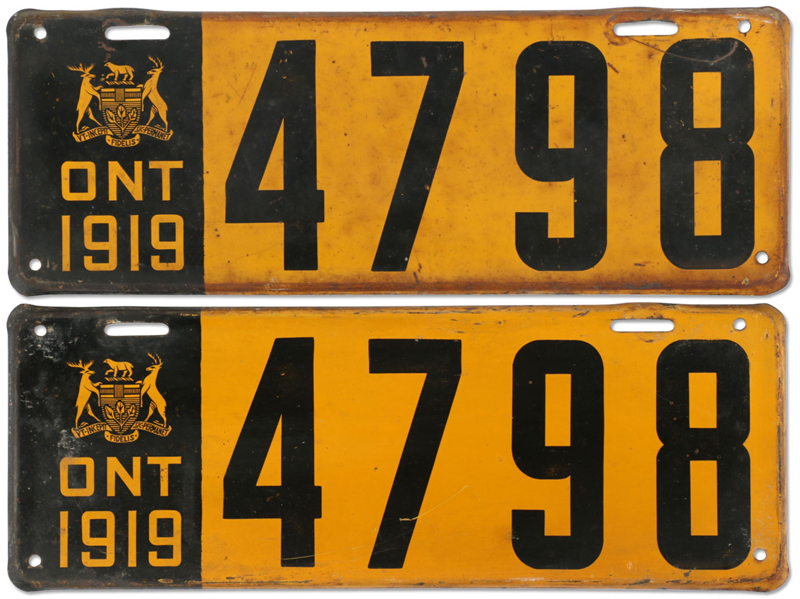 This 1918 pair sold for an incomprehensible $1092.50 (including bidder's premium). It's a lovely set of plates, but that's absolutely not a value that most collectors would consider correct. The 1919 pair, with its shorter number, went for $1035. I have a better pair, with only three digits, which I bought for a small fraction of that value. The group of trailer plates, for which Dave and Eric teamed up to bid, went for $977.50. Dave and Eric certainly did put some weight behind their bid, but they were left behind by nearly $200. 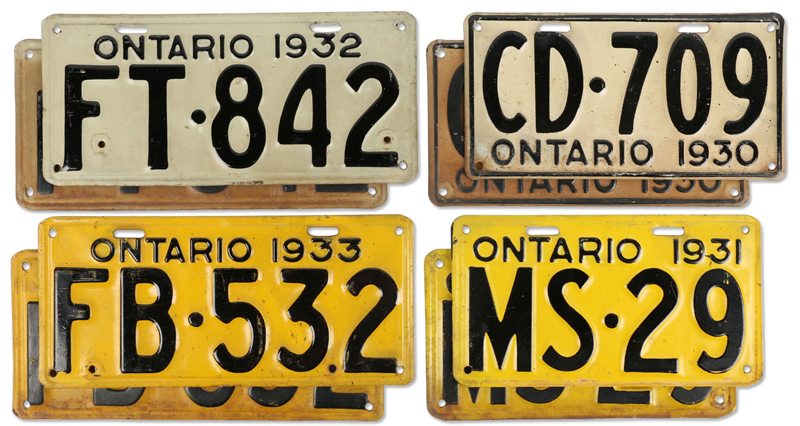 These 1930-1933 Ontario passenger pairs have pretty nice front plates, but the obscured ones are tired, and the 32 / 33 have extra drill holes. Nice examples to have, but they went for a mind-boggling $920. Even if the tired plates looked like the nicer ones, and even if they all cleared for YOM, I would never be able to break even if I bought them for business stock. That would be $230 per pair just to break even, which is well beyond the price range that classic car owners will pay for registrable plates (this is 15 years of YOM business experience speaking here). Finally, these hum-drum plates on the right—easy-finding plates that generally get dumped in my dollar box at swap meets—went for an astonishing $172.50, over ten times their actual value.

So, in the end, Eric and I came away with nothing except a story to tell on a day to remember. The auction was nothing if not entertaining! Plate geeks will be talking about the $16k '16T plates for years to come. The prices are insane, but that’s no one’s fault. It’s just a product of the times in which we live. It’s easier nowadays for people to use social media to learn when high-end items are up for sale. It's also easier to talk about it, and to get excited beforehand, and to get caught up in the auction fever.

On a related note: When the time comes for me to sell my collection, I’m hiring the Millers.

The 𝖥̶𝗈̶𝗎̶𝗋̶ Five Rs of "A Place To Grow": Roll-out, Reflection, Recall, Redo... and REPEAL