Looking back / Forging ahead

It could be that my dreary five-year cycle is finally over.

In my early years of ALPCA membership, I attended whatever conventions I could. My attendance wasn’t perfect, but I was able to get myself to places like Chattanooga, Peoria and Tucson, which weren’t exactly a stone’s throw from where I was living. Of course, in those days, I was single and I could make plans however I wanted. But, of course, family life with a pregnant wife and one or two children has a way of changing the situation a bit.

From 1998 to 2004, I missed only one convention. But family life required me to take a pass on some events that I really could have otherwise made. Without going into detail, I’ll say that my absence for a week is a major inconvenience to my family, and I can’t, in good conscience, put them through something like that unless it’s truly special. The close proximity to home of Erie, Pennsylvania (2009) and Rochester, New York (2014), made those events special enough that I was able to get myself there, with careful planning.

My youngest child is finally old enough to accompany me on a trip to a convention, which is really what will make it possible for me to attend. Valley Forge is reasonably close to home, and if I were alone, I’d drive there. But a 10-hour drive with one child in the car is a little taxing, so we’re going to fly there instead. He likes planes, but has never flown before and wants to conquer his fear of air travel. Attaboy.

He’ll by my guest at the convention, of course. I don’t intend to enroll him in the club as a member. He’ll be exposed to plate collecting indirectly, by me, as he gets older, and if he decides at age 14 or so that he wants to be a member, then that’s fine.

An eight-year-old boy might get a little bored in a convention hall for eight hours, so I’m planning to intersperse our stay with various outings in Philadelphia. The battleship USS New Jersey is moored across the river in Camden, and that will be good for a few hours at least. He’ll also want to tour the Eastern State Penitentiary—he loves learning about cops, robbers, jail, and that sort of thing.

As for me, I’d love to see the Barnes Foundation gallery. I saw some key impressionist works from that collection during a touring exhibition in Toronto back in the nineties. Also, I can’t very well visit Philly without checking out the iconic Liberty Bell or Independence Hall. Between those things, and the convention, we’re going to have our hands full! I’m still learning about Philadelphia, so there may be other attractions to add to our list. I haven’t purchased airline tickets yet, so it could be that we stay an extra day to do it all. We’ll see.

One thing that might be interesting, for this father-son duo, is the donation auction. My son is eager to be given jobs to feel important, and I bet he’d jump at the chance to be an auction holder / runner. However, if we were to attend the donation auction, I wouldn’t be able to volunteer as a display judge, since judging always happens during the auction when the trading hall is closed. I’d like to try judging someday. I’ve brought displays to my past three conventions, so I haven’t been in a position to judge impartially. As for this year: I can’t very well bring a display to the Convention if I’m flying there with a child in tow, unless I can figure out a way to make one that folds up in a suitcase. Joe Sallmen tells me he’s very proud of his design for the 2018 awards (yet to be unveiled by the club).

Each convention has its own memories for me. Sometimes those memories are about plates, and other times, they’re about funny things that happened during the trip: 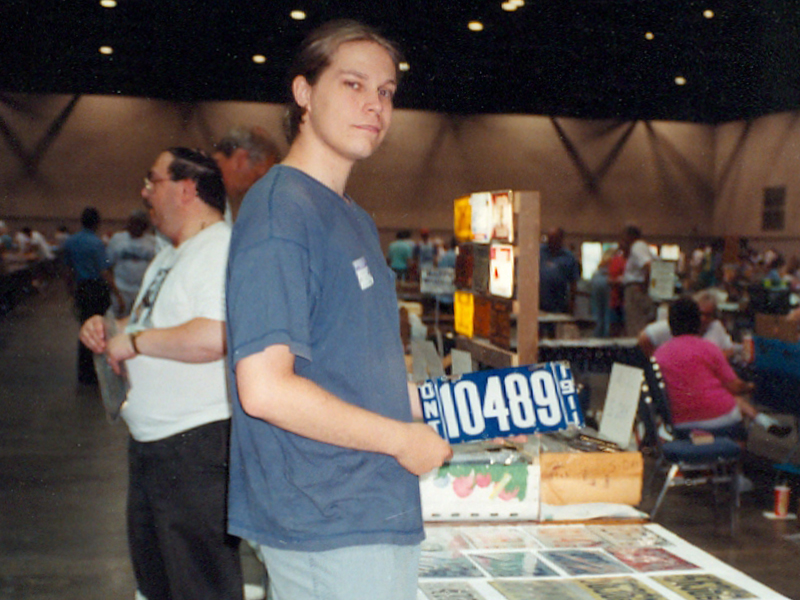 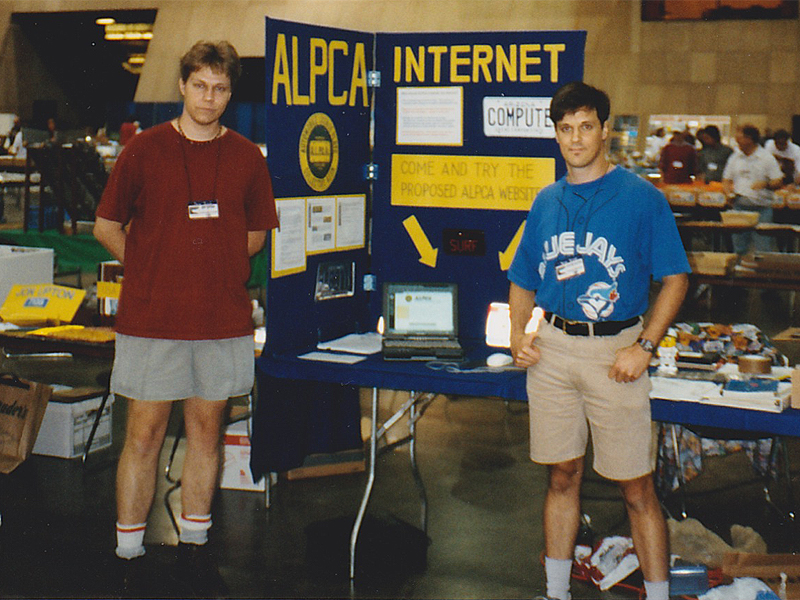 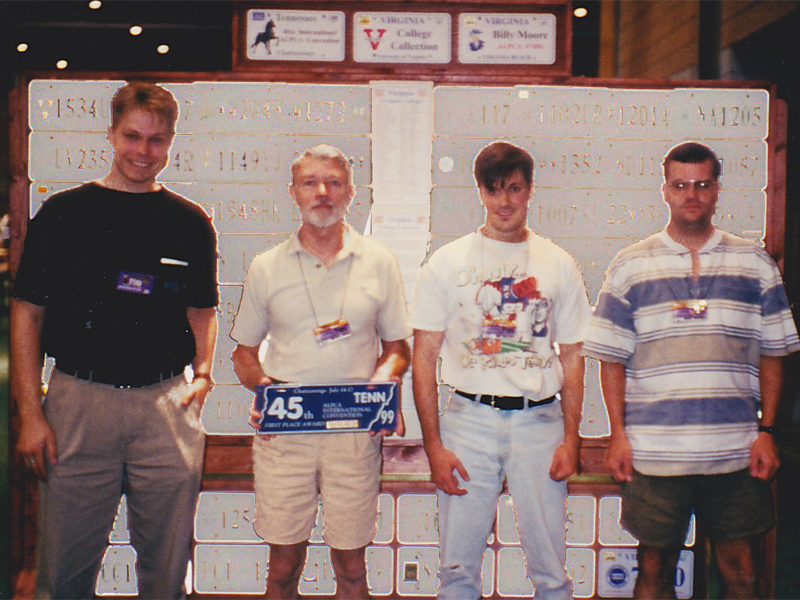 1996, Peoria, IL: I learned first-hand that plate-collecting often requires money. I had none. I couldn’t afford an Ontario ham radio plate, or the first porcelain I ever saw, so I spent what money I had on some really cheap Illinois plates, and gave a twenty to a homeless person. I spent the rest of my time wandering the hall in bewilderment.

1998, Niagara Falls, NY: The year that the ALPCA website was conceived, Joe and I received permission from the Board to construct a booth to demonstrate the site to the membership. The site was given the club’s official blessing at the Board meeting during the convention, and so started my tenure as an ALPCA webmaster. This was also the year I accidentally won a gigantic batch of plates for $100, with no way to get them home.

1999, Chattanooga, TN: The year I got a speeding ticket for doing 81 in 65 by passing while trying to maintain the speed of traffic on I-81 somewhere in southern Virginia. I bunked in a tiny hotel room with Scott Mitchell, Billy Moore and Joe Sallmen. I parked my car in a dodgy lot where you had to roll your dollar up into a tight tube and slip it through the correct hole on a giant board to pay for your spot. Didn’t get anything huge for my collection, and took few pictures, but Billy won a first place award for his Virginia collegiate plate display. 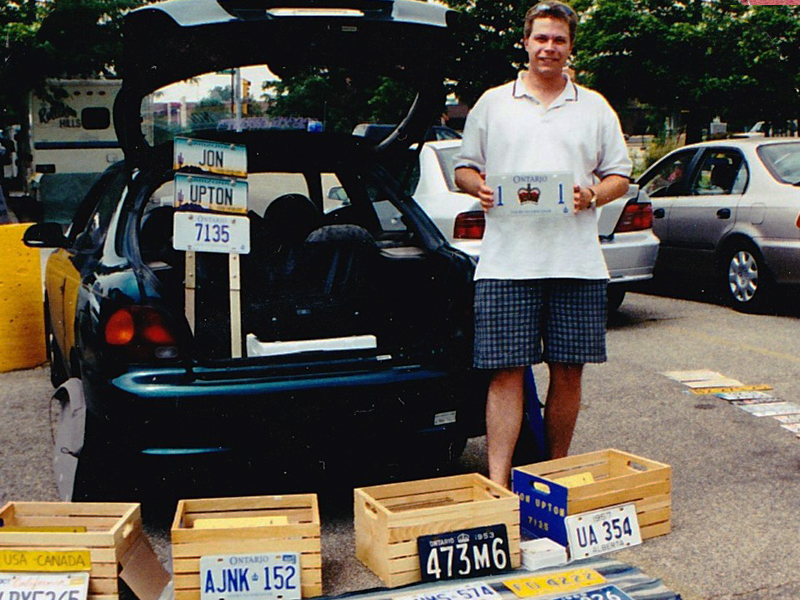 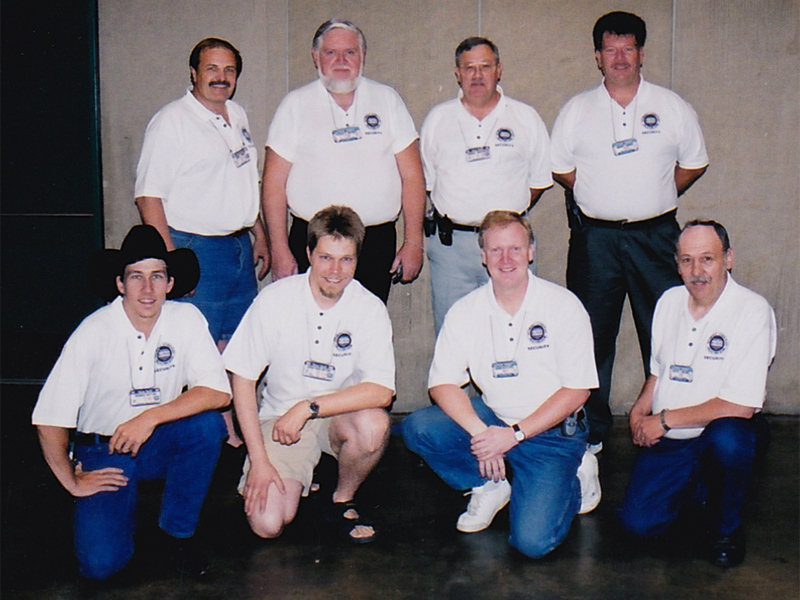 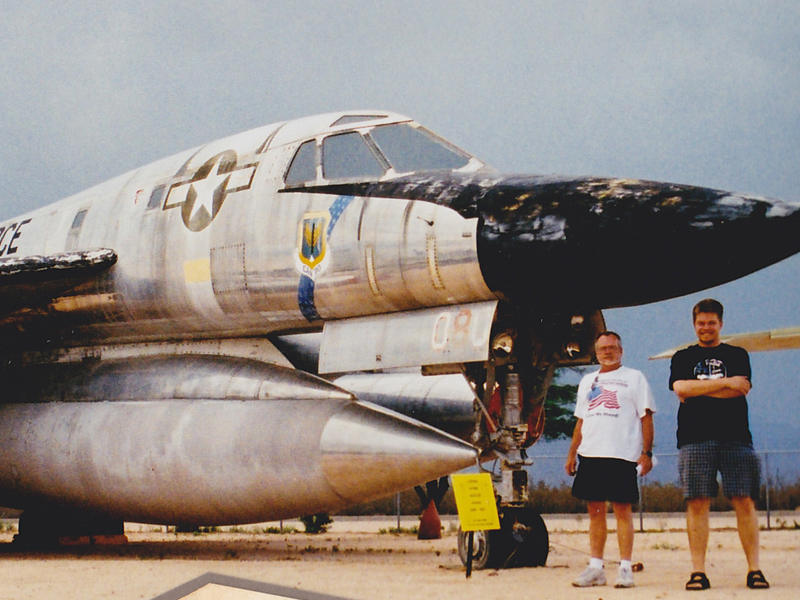 2001, Peoria, IL: The first time I did the unofficial “parking lot meet” the day before opening. I found a great 1912 Ontario passenger that would be a staple of my run for the next ten years or so. One day, Andy Pang and I were starving and looking for a place to eat in a city with little to offer. On a dull street lined with stolid office towers, we saw a neon sign that said “Big Al’s”, so we went inside and were caught off-guard to find it was a strip club. A bartender and a couple of G-strung dancers hollered at us not to leave as we made a quick U-turn outta there. 2002, Niagara Falls, NY: I volunteered for the inaugural ALPCA-organized security team. I won the first-place award for my Ontario passenger run. By a stroke of luck, I upgraded the two weakest sisters the day before judging because Corb Moister happened to have 1913 and 1915 upgraders. That 1915 is still in my run. Got lots of other goodies for my collection. Oh, yes—Andy Pang also found a bag of drugs under the mattress in our hotel room. We flushed them down the toilet and carried on with the show.

2003, Tucson, AZ: This is, to date, the only other time I’ve flown to an ALPCA Convention. No display, no trade table, but I did do security detail again. I developed an interest in international plates and focused on collecting them. I spent an extra week in Arizona after the Convention to spend time with my uncle, who passed away earlier this year. 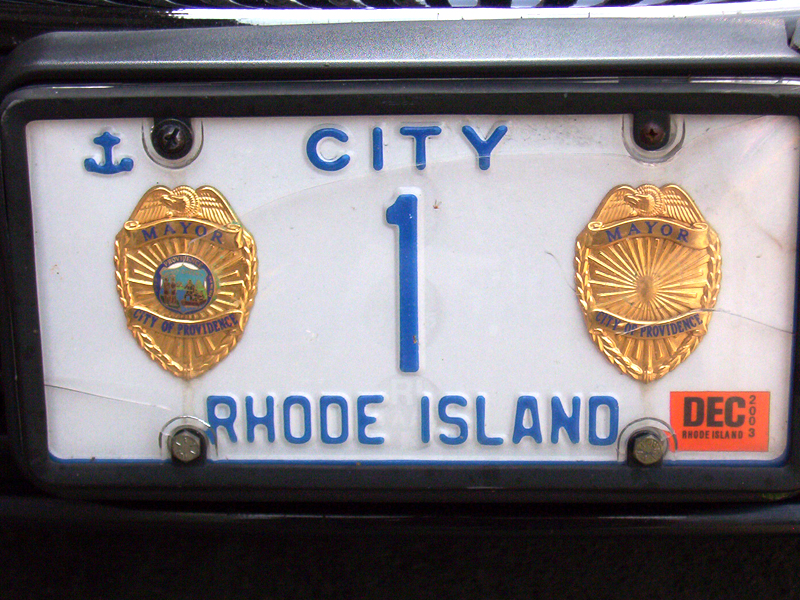 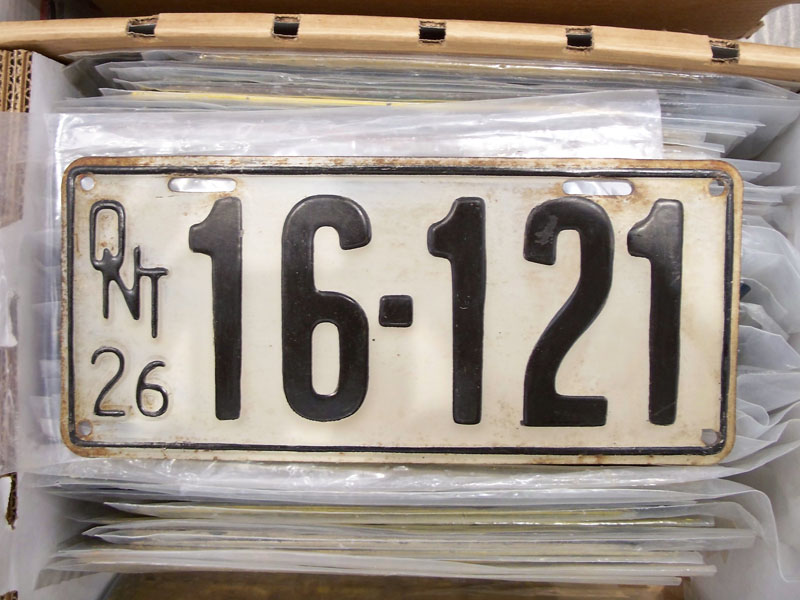 2004, Providence, RI: ALPCA turned the big 5-0 this year, and the convention gave me an excuse to see New England for the first time. I brought a display of diplomat plates, which won second prize. Andy Pang and I ended up with a giant suite at the Biltmore Hotel, which was larger than my entire apartment back home. This convention had some eye-popping displays, including Dave Kuehn’s entire run of #1 Connecticut plates, and I had a great time walking around town spotting the #1 plates issued to the Mayor, and to the Speaker of the House of Representatives.

2009, Erie, PA: I had to take a personal day from work, thereby stretching the definition of “urgent and essential personal business”, but to me, getting to the convention was both urgent and essential. I managed to get there by Thursday morning after driving all night. I’m lucky I took pictures, or I wouldn’t remember much, since I was so sleep-deprived. I’ll always remember Erie for the ’26 Ontario plate I tried to buy, but I couldn’t ever find the seller. It’s the nicest I’ve ever seen… and through the years, another certain friend of mine somehow acquired it, and it’s part of his passenger run.

2014, Rochester, NY: This Convention was the best. Interesting city, terrific food, spent time with great people, and found some key stuff for my collection, and won an award with my finally-complete Ontario run. While the Convention itself was outstanding, I’ll always remember the evening a local cop suggested that my buddies and I go explore the abandoned subway, which was actually open to the public. We spent a couple of hours down there, just blowing our minds not only at how interesting it was, but that we were welcome to explore freely all the while.

I suspect I’ll remember the 2018 Convention in Valley Forge more as a father-and-son bonding experience, with the Convention serving as a common background theme throughout. It should be a great time! I can’t wait.