August is my favourite month. It’s always been so, ever since I was a boy in Algoma District. The mosquitoes and blackflies finish their annual life cycles in August, which meant I could go exploring in the forest wearing a shirt and shorts without being eaten alive. The sun is lower in the sky, which meant that I wouldn’t get a sunburn. August, where I lived, was always a sunny month, so each day was warm and bright, and full of new options.

No one knows where this van is but me.

In the summer of ‘97, I embarked on a week-long road trip through northern Ontario, to look for plates in junkyards, which was reasonably possible at the time. I didn’t come away with an terribly impressive haul, but the experience further burned the association between the month of August and the act of plate-hunting into my mind.

When I was a kid, I’d hop onto my bike and ride around the trails, leaving dust in my wake and looking for piles of junk or derelict cars rusting in the forest. Occasionally, I’d find a plate, which always made a great day even better. Ever since then, August has been the month where I’m reminded of the times I’ve found plates in the rough. I revisit my old stomping grounds each August, and in the hills around the homestead, I’ll occasionally find a plate that I hadn’t seen before. Sometimes I’ll take it, and sometimes not.

August of 2018 was a fairly eventful month of plate-hunting. It actually started on the last day of July while I was antiquing with my son in Leeds County. I stopped at a store that I hadn’t visited in a decade and racked up an unexotic-but-satisfying armload of Ontario plates, including some trailers that I didn’t already have, and a pair of bus plates, too. 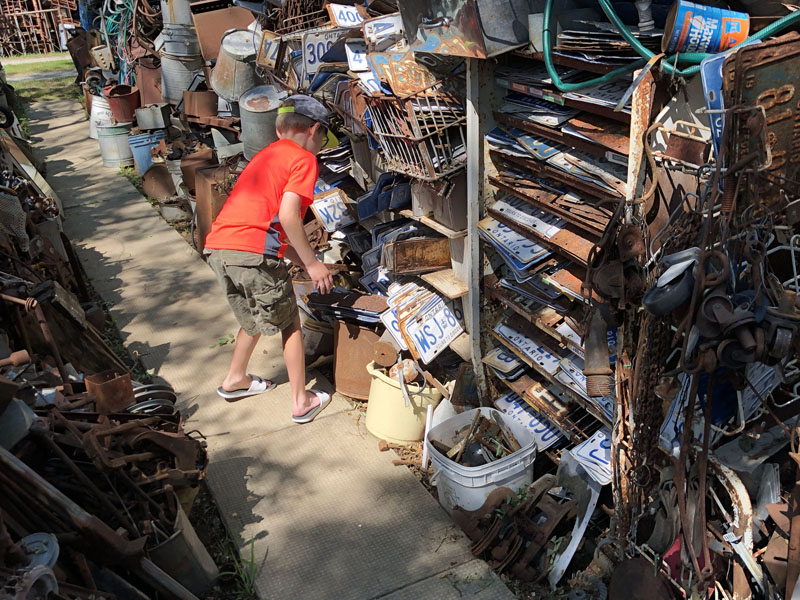 I was in Algoma District and found a junk store that had opened up sometime since my last visit. It was a cool shop-- they had an employee uniform from the long-defunct local brewery, Doran’s. I found a small pile of plates and figured there’d be boring quarterly truck plates. But much to my surprise, there was a really nice wheelchair plate in the box, plus a matching pair of super-rare serif-J plates. The elusive seriffed letter J appeared on plates from the WEJ through WJK alpha series, issued around 1985. The serif-J die was never used again. I’d been looking for such a plate for decades, and suddenly here was a pair in my old hometown. I also bought a couple of Sault Ste. Marie-issued passenger plates, since I collect Soo stuff. 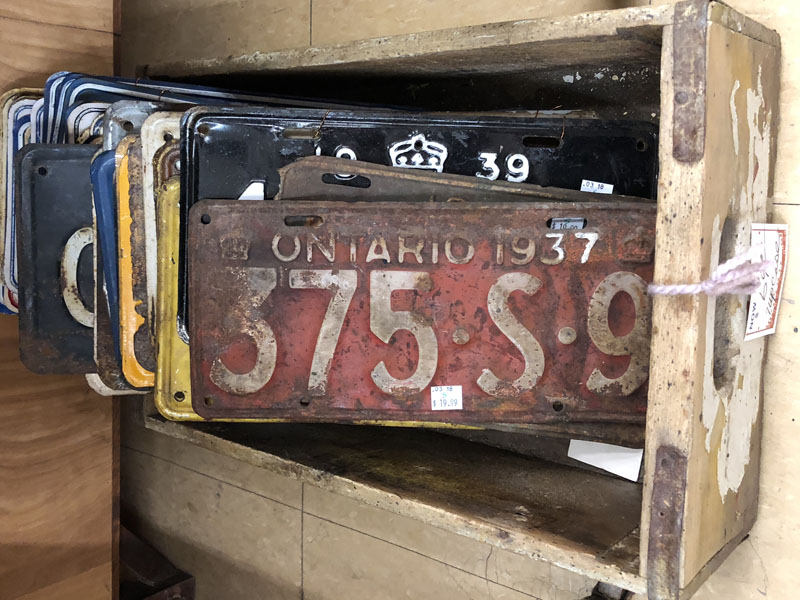 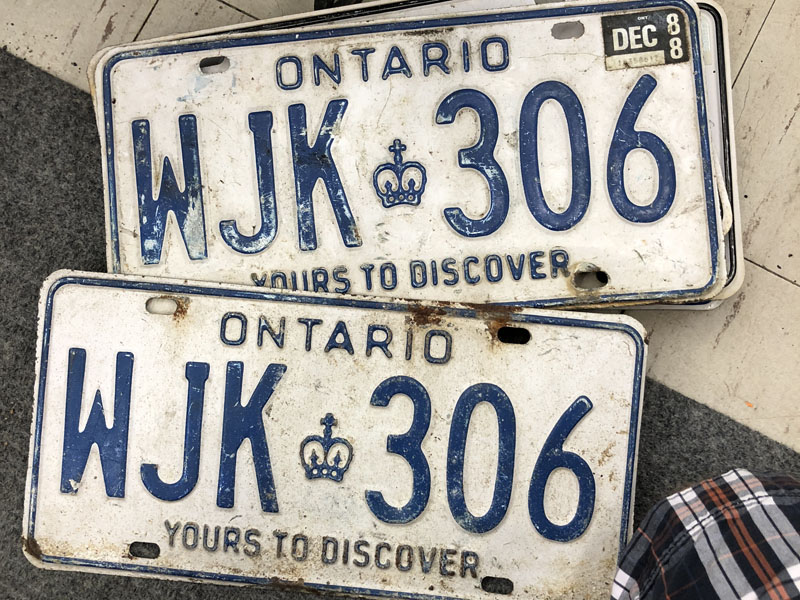 Later that month, I was in Nipissing District. I stopped at a flea market, and found a couple of vendors with plates, but nothing that was worth $10 a pop. Just as I was turning a corner, I found another vendor with a pair of 1973 reserve series plates, with the letters HED. Those letters happen to be the first three of my wife’s name, so I bought them. They had some old overspray, but I figured it was worth it anyway. After all, I have 1973 Ontario plates with both my name and my daughter’s name, so I’d add these to my “family name” Ontario collection. I brought them out to the car, where my wife was reading a book. I asked her to pose with them. She did, but it wasn’t the pose I wanted. (It was the pose I expected, though… she enjoys her anonymity.)

I found myself in Belleville one morning, expecting to buy a small group of plates that had been stored in an old travel trunk. I guess the fella recently inherited the garage from his late grandfather, because he was surprised to find a couple of additional crates that he didn’t know were there. They were jammed with plates. I didn’t want to spend a lot of time there scattering them all over the floor, and taking up the guy’s day, so I took a cursory look through them and figured that they were worthwhile enough to buy.

The most "new meat" I've had in my car to date. But the trip wasn't done yet.

I’d have to find time to sort later, because I was meeting another person that afternoon who had called me up and had a bunch of nice old pairs. They wouldn’t come cheap, but I paid the piper because the quality was absolutely there, and I was interested in improving my passenger run of matched pairs. They came in multiple cardboard boxes, and they barely fit into the back of the car, what with the travel trunk and two crates that I had acquired earlier in the day. I’d have to consolidate all of this stuff before moving on. I had some Rubbermaid bins on hand, and it was a good thing I brought them!

I found a strip mall on the side of the highway with a parking lot that petered out into a decades-old road alignment that was overgrown with shrubs. The foliage would conceal me from most of the passing traffic, and to make it even more perfect, there was a dumpster situated nearby. I’d have to open the trunk, place some of my boxes on the ground, and organize the plates. I’d have enough privacy that there’d be no curious passers-by, and hopefully I wouldn’t be there for long enough for someone to deem my activities suspicious. Perfect!

Before getting down to work, I snapped a picture and posted it to social media, with minimal commentary, just to liven-up the Ontario collectors’ group. The travel trunk was filthy with the remains of decades’ worth of rodent nests. It was hopelessly flimsy and one of the hinges was broken, so it became my garbage can. I only tossed the useless plates: The ones with bullet holes, corners torn away, or blinding daylight coming through the rust perforation. Sometimes people gasp in horror when I do this, but honestly… nobody wants 1962 truck plates that look like they were chewed up and spat into a swamp. Nothing important was lost. I didn’t inspect every single “good” plate. I just placed them into my bins about a half-dozen at a time. I’ll have fun going through them another time… there are a lot of them, so it could take well into autumn.

This suitcase of plates went straight into a dumpster at the corner of Highways 9 and 27.

Roughly half an hour later, I had transferred the plates completely into my two-storey Rubbermaid bins. One of the crates was broken and the other was too awkward to keep in the car, so they were summarily dismissed into the dumpster. That left me with one final task: Drag the trunk over to the dumpster without breaking it. I’m not sure how a long-dead travel trunk can groan under the weight of 30 pounds of plates, but groan it did. I summoned my strength and managed to lift the trunk to the lip of the waiting dumper, and heaved it inside. There was a loud crashing sound as the trunk presumably broke up amid the clattering plates.

I walked over to the car and took a look at the rear wheels. I didn’t remember the body sinking quite that low the last time I filled it with plates, but that was years ago. It’s an older car now.

As for what goodies are in those lots? I’ll work through them slowly over the fall months. I’ll bring a bunch of them to Grimsby.

Plates in the Killaloe sunrise