Being a Boy in Barrie

15 years ago, or so, I brought my wife to the Barrie Automotive Flea Market. She figured it was just a weekend getaway of camping and might be interesting. She enjoyed the quiet camping part, but wasn’t wild about the flea market itself.

About four years ago, I brought my daughter. She found the camping part a bit scary and felt carsick along the ride. She hasn’t been interested in going again.

This year, I brought my son. He had a great time looking for plates at the ALPCA Convention in July, and I figured he’d have fun at the market with me. I wasn’t wrong… but his first love is small dinky cars. He was happy to leave the plates to me while he looked for cars. And that suited me fine. If he’s going to impulse buy, cars at a buck apiece would do nicely, because he probably wouldn’t find any plates at that price!

We left after school and drove straight——or as straight as the old highways would allow——all the way to Oro-Medonte. The section of Highway 28 starting at Hardwood Lake was under some serious construction, with the limit down to 60 and no asphalt all the way to Bancroft, which added a half-hour to the trip. We made a quick pit stop in Bancroft for ice cream, but the sun set and the sky grew dark quickly. We made it to the campground by around 9:30. I managed to pitch the tent by flashlight with my nervous son worrying about bears, and I did my best to explain to him that we were in a small wooded area surrounded by farmers’ fields. Either he believed me, or he was dead tired, because he fell asleep as soon as he burrowed into his sleeping bag.

The night was a bit cold, and it was hard to force ourselves to change from PJs into clothes the following morning. The sky was clear, and it would surely warm up, but this was going to start as a pants-and-sweatshirt outing. We arrived at the market field a little after seven, and we moved to the northeast end to start combing the field methodically, back-and-forth.

With no PA system, and market boss Don Hanney having passed away within the past year, there was nothing to wake the vendors up and push them into opening for business at 7 am. In the better market era before 2015, Don would squawk at the vendors through a very loud and tinny PA system and make sure they were awake. It was easier to shop in the morning, with most vendors either open or at least outside untying their tarps. This being 2018, things have changed a bit and the vendors don’t have as much of an arse-kick to open for business in the early morning. I walked along the first few rows of vendors, and I saw only covered tables, one after the next. Eventually, close to 8 am, most were open and I could shop. 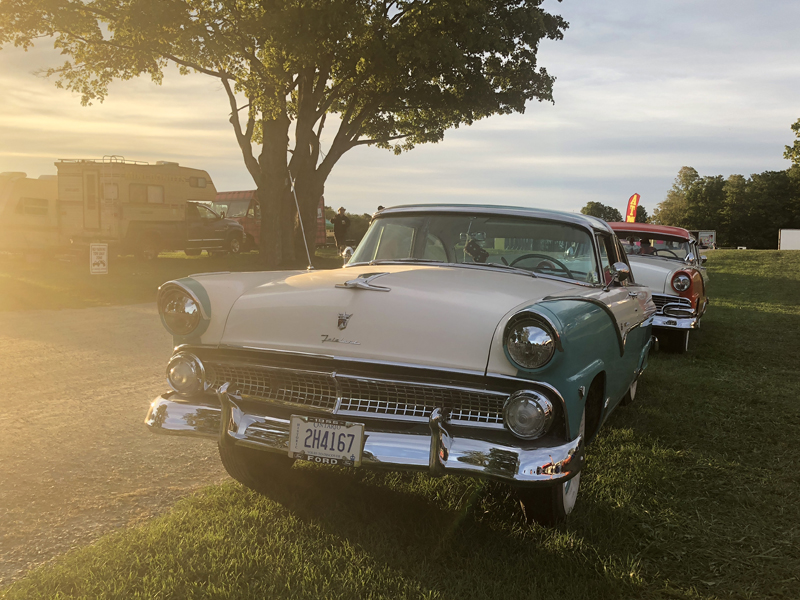 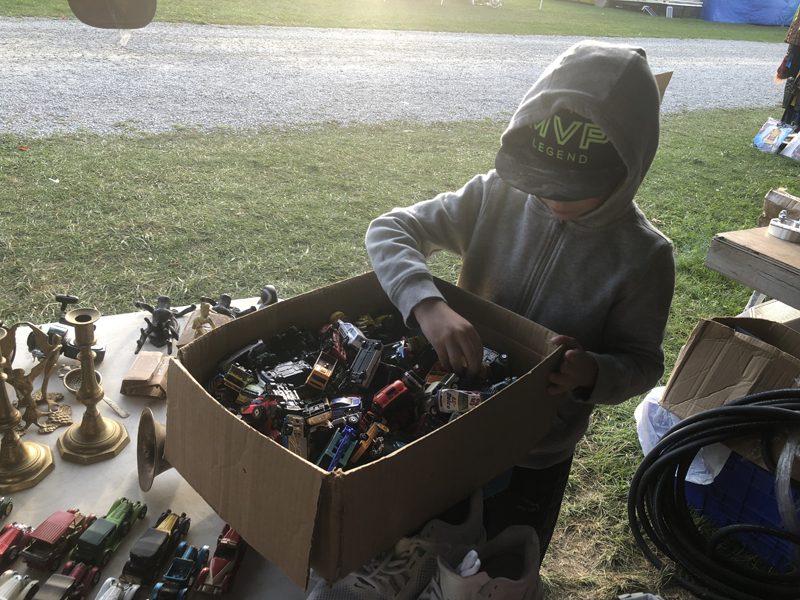 My first stop was at a vendor who had a small-but-eclectic selection of plates in a single cardboard box. There wasn’t much there of interest to me, but I did find a mint set of ‘78 New Brunswick “amps” plates. My son Greg is an amputee (born missing digits on one hand) and is a member of the War Amps CHAMP program, so I decided to get the plates so we could split them. He has a cork board on his bedroom wall and can hang his plate there.

Every so often, I had to stop to allow Greg to sift through dollar boxes of toy cars. But, in turn, he was a good sport about giving me time to find plates. I did find quite a few of them; there were more vendors with plates this year than last. Today, I didn’t really want to buy plates a la carte with the intention of flipping them to other collectors. I’ve started collecting trucks and trailers more earnestly, and I wanted to find some keepers to fill the holes in those runs. 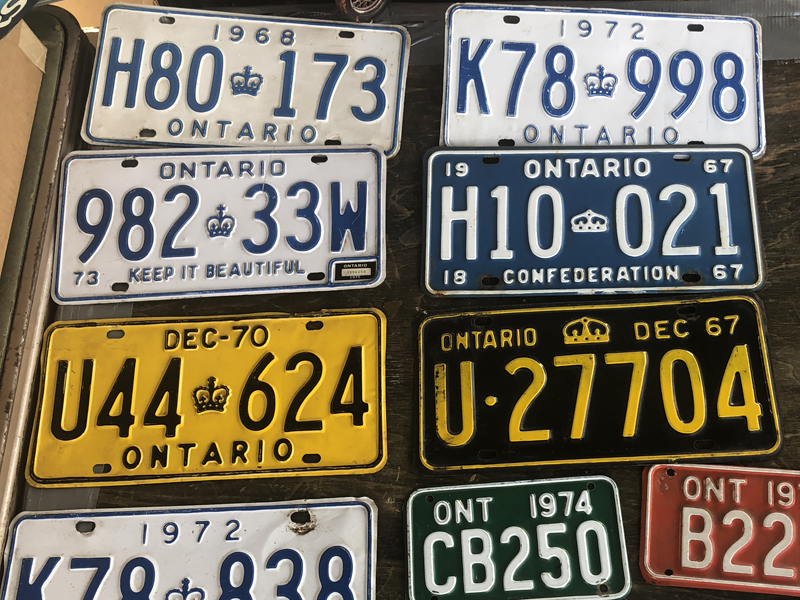 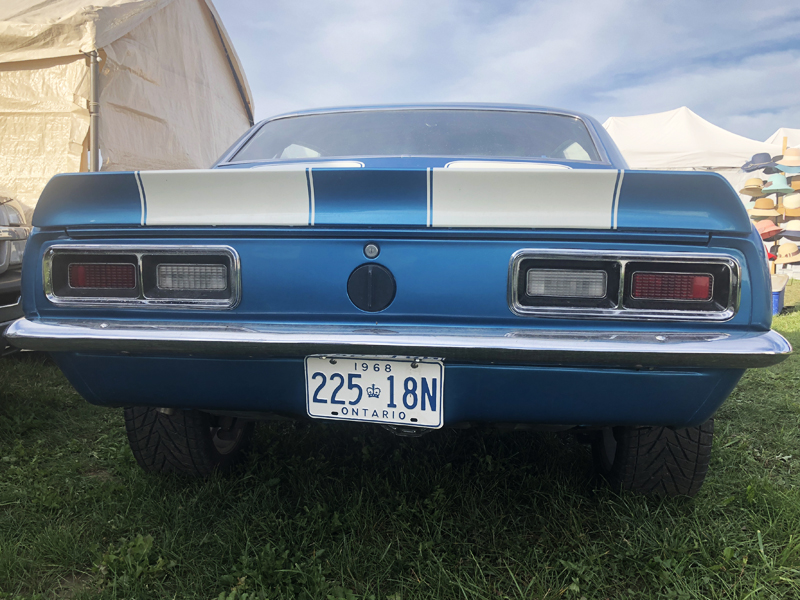 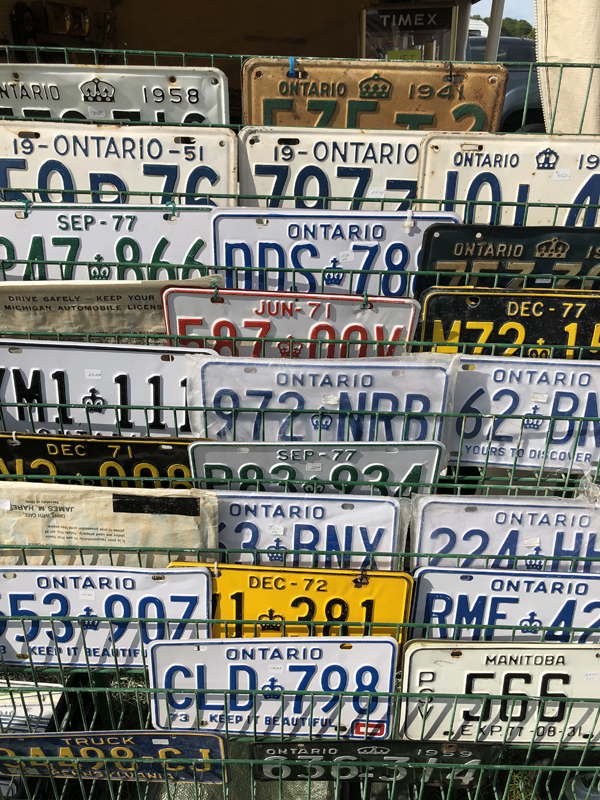 I found a vendor who had some old crime scene photographs from the OPP detachment in Perth. Most of them were glossy eight-by-tens, and some had the old OPP departmental stamp on the rear side. I decided to buy a handful of photos. The ephemera interests me more than it did before. The same morning, I found an embossed aluminum plate used to identify press cars. No serial number, and not a registration plate, but it did say “Canadian Community Newspapers Association” on it. I bought it for five dollars.

I spotted a couple of motorcycle dealer plates in use on some three-wheeled demo bikes that were being shown by a dealership. I’m always entertained by motorcycle dealer plates when I spot them in the wild. YOM-plated classic cars are also lots of fun to spot. I came across a sleek ‘68 Camaro for sale in the field, sporting a nice set of 1968 plates. Later on, I stumbled on a stunning ‘68 Old Cutlass with a five-digit pair of 1968 plates registered to it. The car wore a sign that said “just sold”. As I was taking a picture, the new owner came over to chat. I gave him my card and advised him that the plates on the car could be transferred to him only at the same time as the sale was processed. It turns out that the new owner was himself a dealer and had some familiarity with transfers, but he had never done it with a set of YOM tags before. I learned that this car had only one prior owner: It was bought new in Orillia in 1968 by a collector who treated the car gently and kept everything original. Fifty years later, the same owner was slowing down and decided to sell his baby. The man I was talking to knew the owner and car well, and jumped at the chance to buy it. Imagine that… all-original, beautiful condition, fifty years old, and one owner. Amazing!

Overall, I was happier with the market this time around. There were more plates to find, which made things more fun for me, of course. But they’ve been able to keep the layout of the field more or less rectangular, which makes for easier browsing. Moreover, they’re making maps of the field again, complete with the alphabetical index, so that we can once again locate a certain seller in the field (that was a deal-saver for me about five years ago when I had to find the one guy with the stuff he brought at my request). There seemed to be more food vendors. They’re still clustered at the northwest end of the field, but there were a few other fry trailers in the field, so the lines were shorter overall. They now have a replacement for the defunct Country Store (located in a shipping container, so not as quaint as before). And, although I’m not arriving at this conclusion scientifically, I found that there were fewer non-automotive vendors. Gone was the Yonge Street crowd selling knockoff purses and cheap phone cases. Or maybe they were just invisible because there were more car-related things for me to enjoy.

Probably my biggest buy of the day was with a single vendor who happened to have some really nice 1930s trailer plates, which I’m now actively collecting. I purchased 1933, 34 and 35 trailers for my collection, plus a couple of truck plates (1928 and 1955), which I have also decided to collect more actively. It’s nice to be able to make some finds. For a long time, my passenger run has been more or less finished, and it was a rarity for me to find something that would go into my collection. I’m glad my interest in trucks and trailers has finally surfaced. It sure does make the hunt more fun when I’m looking for more than just simple YOM pairs as business stock.

Greg was a real trooper and had a great time buying up cheap dinky cars. He was getting pretty tired by afternoon. We returned to the car for a drink and a snack a couple of times and ventured onto the field again, where I shifted my focus from plates to Beetle parts and tools. I was getting tired, too, and I wasn’t looking all that carefully. By four o’clock, Greg and I had been on the field for nine hours and had our fill.

It had been a good outing. Without a doubt, it was the best Barrie day I’d had since the event park changed hands in 2015. It’s not quite as big as before, and some of the magic from 10-15 years ago is gone, with some of the long-standing reliable vendors having retired. However, the grounds are again organized logically, there were more food options, and there was definitely more car-related stuff to browse this time around. Moreover, the nice weather didn’t hurt. Of course, it wouldn't be the BAFM without questionable, low-brow attempts at humour from a few unenlightened vendors.

Our plan was to camp for the night at Bass Lake Provincial Park, just west of Orillia off Highway 12. We checked in, got ourselves set up, and then went for a dip in the lake before the sun went down. We were both worn right out, and we were asleep in the tent by 9 o’clock.

When morning came, we took a hike around the park trails. There’s nothing like a walk through a forest to make a dad and his son feel alive and refreshed. We took our sweet time on the drive home, stopping at a couple of the curious places that I had always noticed, but never visited. Places like the Kinmount railroad museum, or the World’s Smallest Book Shop. I showed Greg the weird surveyors’ disc I found last year by Furnace Falls, and we stopped so Greg could watch people launch their boats at the Centennial Lake boat launch. That was a good stop to make-- I found a roadkill trailer plate there in pretty good condition. We stopped in Burnstown for some fries and ice cream, too. What is normally a four-hour drive home turned into six, but it was nice not to be in a hurry.